The tensile specimen (cast steel) is cut from the button spindle with the size as shown in Figure 5 and the thickness is 1mm.

The result of the stretch is shown in figure 6. With the increase of tempering temperature, the tensile strength of low alloy wear-resistant cast steel decreases, but the elongation increases. Good Comprehensive Mechanical Properties can be obtained at tempering temperature from 530 °C to 620 °C. According to the test results of mechanical properties, the optimum heat treatment temperature is determined as normalizing at 890 °C and tempering at 620 °C.

Fig. 7 is the microstructure of the sample (cast steel) tempered at different temperatures at 890 °C normalizing. The tempered microstructure consists of pearlite (P), ferrite (F), and Bainite (B). It can be seen that with the increase of tempering temperature, the white ferrite increases, and the bainite and pearlite granulate, so the hardness and tensile strength decrease, and the elongation increases.

2.7 comparison of microstructure and morphology under different treatments

SEM observed the Button ingot specimen’s morphology in 4 states (as-cast, annealed, normalized, and tempered). The results are shown in Fig. 8. It can be seen that the microstructure of the sample changed from acicular Martensite to granular pearlite after annealing, which indirectly explained the validity of physical simulation, and then refined after normalizing, and then promoted the increase of ferrite after tempering, so the adjustment of the plastic index can be realized.

The energy spectrum of the final tempered sample is analyzed by scanning the energy spectrum, and the results are shown in Fig. 9. It can be seen that the distribution of the elements in the final state tends to be uniform (especially the Mo, S, Mn elements). 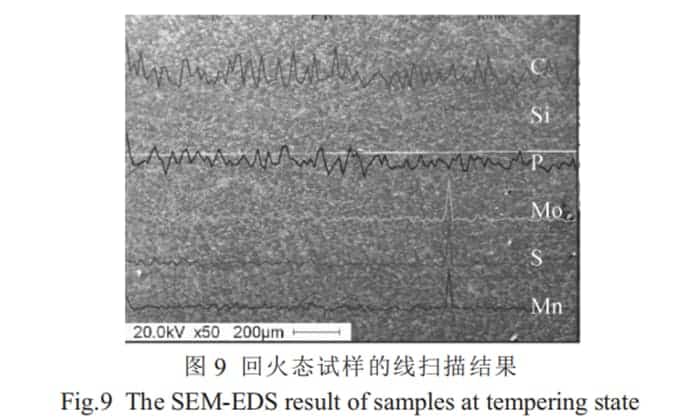 (1) after normalizing at 890 ~ 940 °C, the microstructure of low alloy wear-resistant cast steel is ferrite and Pearlite, and the hardness of the steel decreases first and then increases, and is the minimum at 920 °C.

(2) after normalizing at 890 °C and tempering at 500 ~ 650 °C, the low alloy is wear-resistant. The microstructure of cast steel is a mixture of Pearlite, ferrite， and Bainite at room temperature, and the tempering temperature is between 530 °C and 620 °C.

Influence of Heat Treatment on Mechanical Properties and Microstructure of Low...